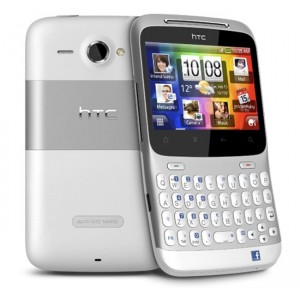 You wait (really?) for a Facebook phone and then 4 seem to appear all at once!

First was the INQ Cloud Touch and Cloud Q and now here comes HTC with the HTC ChaCha and HTC Salsa!

For the ChaCha HTC has completely re-worked its Sense UI to fit the new landscape screen as well as making it play nice with both swipes ‘n’ pokes as well as real button-presses.

The biggest deal for those FB addicts is that both phones get a special Facebook button! Hold down the HTC ChaChaâ€™s Facebook button and itâ€™ll access Facebook Places and Deals – so, no time lost when checking in to places, or to grab discounts and special offers.

When you’re checking out a video or picture and get the sharing urge just tap the Facebook button and off they go to be shared with all those Facebook friends of yours you popular creature you!Â  You can even do the same with the music you have piped to your lug-holes – Facebook Silent Disco anyone?

The ChaCha, of course, has address book integration but your friendâ€™s Facebook status updates will be posted right next to their name in your directory.

What is really handy is that the HTC ChaChaâ€™s calendar will drag in the Facebook events that you’re attending as well as being able to see the Event’s wall, photos and whoâ€™s attending. The amount of time I’ve agreed to attend something via Facebook before checking my calendar is embarrassing!

If the ChaCha has waaay too many buttons then check out the HTC Salsa.

The Salsa is equipped with a 3.4 inch touchscreen as well as that all important Facebook button.

The HTC Salsa runs the usual Sense interface and not the tweaked ChaCha version but it does have more social networking stuff baked in. 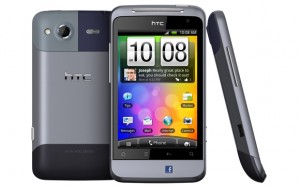 The address book shows your friend’s statuses and whether theyâ€™re up for an IM session or not as well as being able to see their mirror self-portrait profile pictures.

The HTC Salsaâ€™s calendar has that handy Facebook syncing so you get Event locations, whoâ€™s attending and Event wall posting/reading.

The special Facebook button performs the same ChaCha tricks allowing you to squirt photos, videos and songs youâ€™re listening to direct to your Wall as well as the long press shortcut to Facebook Places check-ins and Facebook Deals.

HTC says the Salsa will be on sale by the End of Q2 and that the ChaCha and Salsa should be affordable as they’re perched â€œbetween the Wildfire S and Desire Sâ€ in its line-up.