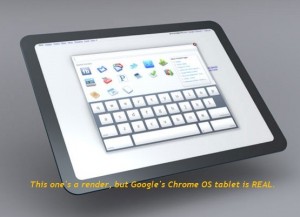 There’s talk about a Google Chrome OS tablet which is said to be bolted together by none other than HTC.

A release date of November 26th (for those that love to join the shopping crush this is also called Black Friday!) and according to the source it will be sold through Verizon at a subsidised price or even for free on contact – OUCH! All that might hurt iPad.