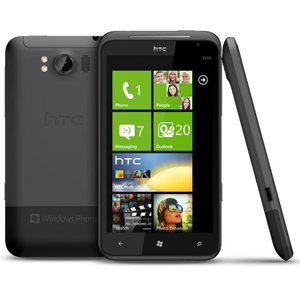 Cut to the chase

Before I start getting down n dirty with all the deets here’s a quick glance guide of HTC‘s Windows phones:

The Titan has the brash swagger awarded by packing a humongous 4.7-inch screen, 16 GB storage, an 8 megapixel camera, and a 1.5 GHz processor. That screen! Samsung classes 5.3-inches enough to be a tablet!

These phones are obviously aimed at different sectors. The white and silver Radar is the middle-weight fighter with a body “crafted” from a single piece of metal and priced at €399. The Titan is the Daddy with its 9.9 mm thin unibody construction, and premium price-tag of €599.

As you’d expect from the lower price the Radar is missing some things – no compass or gyroscope here. It does, however, pack GPS, proximity and ambient light sensors, and an accelerometer. Of course, Titan ticks yes to all of the above.

Both phones come loaded with front-facing cameras (1.3 megapixel on the Titan and VGA on the Radar) so there’s the answer to the “will Windows Phone Mango support video calling?” question. 😉

The odd thing is that the only built-in application that can make use of those self-portrait cameras is the standard camera app by way of a button for switching between the main camera and the front-facing one. The rest, I guess, is down to Mango developers to utilise them fully.

It’s all about the HTC Titan

So – that was a quick run through of both the new HTC Windows phones but the Titan steals the show – mainly due to its size!

The Titan is literally titanic! That 4.7-inch, WVGA (800 x 480 pixel) screen is perilously close to becoming a mini-tablet now that Samsung have released the Galaxy Note. I reckon that HTC missed a trick with that measly resolution though – just imagine that size screen dishing out full HD. It is supposed to be a premium blower isn’t it after all?

It looks as though HTC raided the HTC Flyer’s garage as the Titan is rocking the very same 1.5GHz single-core processor as the tablet. That’s all well and good as the iPhone’s tend to share the chips with the iPad but what could be irksome is that the same processor is shoved inside that lower-level HTC Radar. Ouch!

If I was HTC I would’ve thought long and hard about slipping something multi-cored into the Titan but then, as Microsoft are calling the shots about specifications, it might not have been HTC’s choice.

Also under the hood is 16GB of flash memory and that processor is buddied up with 512MB of RAM.

The Titan has a decent 8-megapixel camera with an F2.2 lens partnered by a dual-LED flash. Another crushing blow for those expecting full HD as video capture goes as far as 720p video.

Round the front is the awaited 1.3-megapixel camera which should pounce on the recently announced Skype integration for video calling.

Both devices should become widely available in Europe in October.

To me it looks like the lines between tablet and phone will soon be getting fuzzy – is this a good thing or a confusing thing or don’t you care as long as the spec sheet looks value for money?