HRP-4 Android – The End of Civilisation? 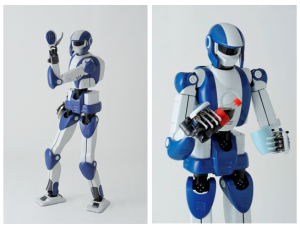 This is a sign that it’s not too far in the future til robots finally have the mobility and intelligence to take over the world. ~GULP!~

Over in Japan the National Institute of Advanced Industrial Science and Technology (AIST) has developed one of the most advanced cybernetic human robots out there – the HRP-4.

The 1.5 metre tall HRP-4 android is primarily designed for use at R&D facilities at universities and companies.

The robot can be told to strike poses as well as it being able to detect and track human faces and certain objects.

AIST and co-developer Kawada Industries plan to start selling the HRP-4 in January next year.

Check out the vid: