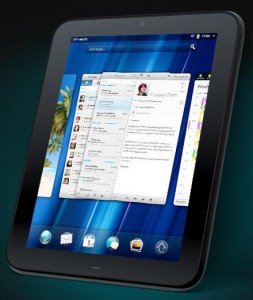 The HP TouchPad is almost here! If you’ve been counting down the days til the webOS powered slate is purchasable – here’s some splendid news!

The TouchPad has just appeared on HPâ€™s official site who are now offering it for pre-prder.

The HP tablet will arrive with Exchange support, access to a load of apps via the App Catalog, Beats audio tech as well as supporting myriad audio formats.

Straight out of the box the TouchPad will support Flash, Google Docs and Box.net as well as wireless networked printing.

Yup, it looks like HP is attacking Apple as those prices are exactly the same as the similarly spec’d iPad 2 Wi-Fi models.

Will HP’s webOS be enough to entice people away from Apple’s cart?