HP TouchPad now £115 – Get Them While You Can and Wait for Android! 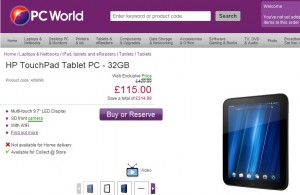 Nope – not if you sprint over to Dixons you aren’t!

Dixon’s, Curry’s and PC World are all slashing an amazing £300+ off the once doomed HP TouchPad tablet.

Dixon’s spokesman Mark Webb announced this via Twitter: “Dixons.co.uk: HP Touchpad SALE, Limited Stock online from later today. £89 for the 16GB and £115 for the 32GB.”

TouchPads are now available to buy/order online from the store links above and this huge price cut will come into effect on the limited stock in branches of high street stores from tomorrow. A similar price slash in the US has seen the tablet sell out completely.

This could oddly save the TouchPad as one of the reasons HP gave for ditching the webOS ecosystem is that there weren’t enough apps because developers aren’t interested in a system no-one owns. Now, with many more people owning TouchPads at this heavily discounted price will the interest return?

At full price, even though webOS was/is good the TouchPads were alright – at around £100 you’re getting a hell of a lot of bang for your buck. As the Americans would say 😉