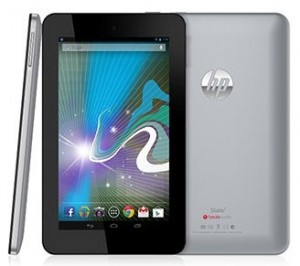 HP has confirmed that its Android-powered Slate 7 device will ship from May 1st in the UK.

After announcing that a range of HP puters will land with LeapMotion gesture control installed, they have confirmed that the UK will get their 7-inch tablet, the Slate 7, in 2 week’s time.

The device was first unveiled at the Consumer Electronics Show trade show in January but had been rather coy on a specific release date for the device.

That has all now been blown out of the water thanks to the product page on HP’s UK website which gives a shipping date from May 1st and confirms the price at £129.

Priced at the lower end of the tablet market and designed to appeal to more consumer markets the devices feature a 7-inch, 1024 x 600 display, 8GB of storage and runs on the 4.1 Jelly Bean version of the Android operating system.

The Slate 7 is equipped with an ARM 1.6GHz dual-core processor and 1GB of memory. Its dimensions are similar to that of the Google Nexus 7 tablets, measuring in at 10.7x197x116 mm and weighing 372g. It also boasts a 3.15MP rear-facing camera and Beats audio stereo speakers.