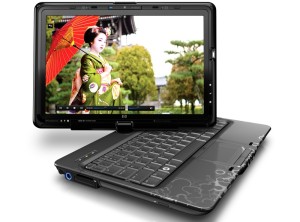 HP’s Touchsmart tx2 looks pretty cool and it also happens to be the first consumer-oriented convertible notebook to feature a multitouch technology built into the display.

The 12.1-inch screen uses a 1200×800 multitouch capacitive touchpanel that can track two points simultaneously (ala iPhone, etc), operates with fingers or a stylus and comes with the Mediasmart 2.0 interface customised for the notebook.

The Mediasmart 2.0 software lets you watch movies, look at photos, play music, listen to radio and watch TV on demand.

With this multitouch mullarkey you’re able to select, drag, double tap, pinch, zoom, arc, rotate and flick. In addition to working with the MediaSmart software, the multitouch gestures will also work with a variety of Windows software out of the box including Microsoft Office, most internet browsers, and most photo applications.

As far as Windows 7 Beta compatibility goes, the tx2 currently will not work with the new OS, but HP says they are working with Microsoft and they can’t comment on unreleased products.

The HP TouchSmart tx2 is expected to be available in the UK from January 2009 at a recommended street price starting at Â£ 799 inc. VAT.