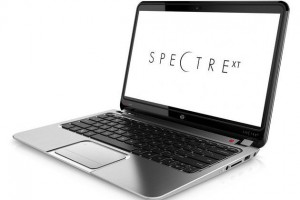 HP wowed a number of people, me included, with their Envy 14 Spectre. A mixture of performance and glass-covered good looks makes it a winner in my eyes. The HP Envy Spectre XT is an ultrabook which aims to build on the original Spectre’s name with a thinner shell, revamped design and power from Intel’s third generation Ivy Bridge processors.

HP held it’s show-and-tell over in Shanghai where they took the wrappers off a host of printers and enterprise tech.

The HP Envys and Spectre XT all include Beats Audio tech as well as HP TrueVision HD Webcams as well as offering an optional backlit keyboard.

Let me hit you with the main event.

The Spectre XT is the latest entrant in to the Ultrabook arena, and very nice it looks too!

It follows the Ultrabook trend of featuring sloping, tapered edges and measures 14.5 mm (just over half an inch) thin. Yup, it’s even thinner than the Envy 14 Spectre, which is .79-inches thick.

As well as shedding some mms the Spectre XT is lighter than its stablemate – weighing in at 3.07 pounds compared with its older sibling’s 3.79 pounds.

The Spectre XT does share its looks with the Envy Sleekbook and Envy Ultrabook series but there’s more of a quality feel with the XT.

You notice straightaway that the all-metal build makes such a difference and makes it worthy of that premium price tag.

The Spectre XT’s keyboard promises to offer you a satisfying typing experience thanks to a spacious keyboard and raised chiclet keys.

What struck me most about the Envy 14 Spectre was the screen. Word has it that the Spectre XT is even better – Personally, I need to see it to believe it 😉

Other niceties on the XT include 802.11n WiFi, Bluetooth, and Intel’s Wireless Display (WiDi) technology, a backlit keyboard and an HD webcam.

If you want more then perhaps look out for the Pro variant which will come with a TPM module and Windows 7 Professional.

Other Ultrabooks, EliteBooks and Sleekbooks

The HP Envy Ultrabooks will be 19.8mm thin with either a 14in or 15.6in display, and they’ll use Intel Ivy Bridge chips to deliver up to nine hours of battery.

The HP Envy Sleekbook comes in 14in or 15.6in display sizes and packs an AMD Accelerated Processing Unit (APU) for up to nine hours battery life.

For business types, HP’s also flaunted its EliteBook Folio 9470m. This will be 19mm thin with a 14in display and offers you myriad connectivity options including USB 3.0, VGA, Ethernet, and a DisplayPort for connecting to all the old tech lying around in your office. The Elitebook features an all day battery, and a powerful Intel Core vPro third gen processor.

The HP Spectre XT will cost from £900 and is available in late June, while the HP Envy will be available from July priced from £650 for the Intel-powered models and £550 for the AMD-pakcing version. The HP EliteBook Folio 9470m is due out in October and should be priced nearer to that date.