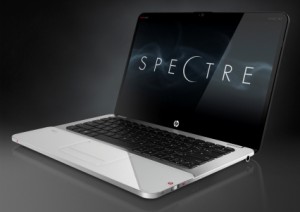 OK – so CES 2012 is starting to look like Ultrabook Fest and HP has joined the party with it’s first Ultrabook – the Envy 14 Spectre. Remember the teasers? One thing that makes this machine outstanding is that it’s made of Gorilla Glass.

That’s right my Gadgety friends. HP has made the entire outside of the lid, the screen and the wrist rest out of that special toughened glass which kinda makes it like an iPhone 4 Ultrabook in the look and feel department.

I am sure that this will give the HP Envy 14 Spectre a very top-end feel and anyone that’s thinking that it wouldn’t be so great being dropped from a great height – errrr… name me a regular laptop that is?

You get the standard Ultrabook kit under the hood with Intel Core processors available along with a 128GB SSD drive, with an option to add a second if you’re short on storage and have deep pockets.

HP have added in Beats Audio tech that adds a bigger bottom to your bass and you get a neat analogue wheel on the side for quick changes to the volume level.

The machine demonstrated at CES 2012 was loaded with an Intel Core i5 processor based on the Sandy Bridge microarchitecture. The laptop will support up to 8GB of RAM and 256GB of solid-state drive storage. The port options include USB 3.0, HDMI, Ethernet, and DisplayPort.

The Spectre has a 14-inch screen, but is designed in a typical 13.3-laptop frame and offers a resolution of 1,600×900 pixels. The laptop is 20-mm (0.79 inches) thick, and weighs a shade under four pounds (1.8 kilograms). That’s pretty cool but HP could’ve had the cherry on top if that screen was full on HD though.

As well as being covered in glass another stand-out feature is that the Spectre Ultrabook is packing near-field communications (NFC), which allows two compatible devices to share information simply by touching. Users will be able to transfer data such as the URL of a map or website from an NFC-enabled mobile phone to the Ultrabook or vice-versa.

HP doesn’t expect people to buy the ultrabook specifically for NFC but as people experiment with NFC, it could possibly become an important complementary feature.

There’s no word on UK pricing or availability yet, but the Core i5 entry-level model with 4GB of RAM will land in the States at a tear-inducing $1,399 (around £900). That pricing may well have created a “premium ultrabook,” niche.