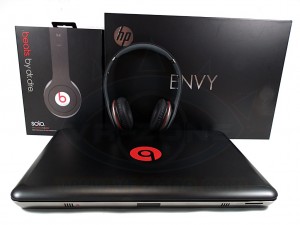 The moment had to come. It only seems like yesterday when we first met. I picked her up as she sat at reception. Without any words spoken we went back to my place and enjoyed a fascinating fortnight of getting to know each other. Then she was gone.

Don’t worry my gadgety faithful – I haven’t changed the purpose of this place, I was referring to my test period with HP’s Envy 14 Beats Edition.

She’s got the look – The matte-black finish on the lid and wrist rest, attractive dark nickel-plated finish trim around the chassis, the subtle design touches such as the Beats ‘B’ on the keyboard, red accent colours and keyboard backlighting – I could even put up with the Beats logo on the lid and the lit HP logo.

After pawing Evy it was apparent that I was leaving my mark – That matte finish does have a tendency to attract fingerprints and smudges.

At first sight – The 14.5-inch display was bright, clear (perhaps a little glossy) and has a maximum resolution of 1366 x 768 pixels – I used the Envy 14 Beats as my main lappy and found that the screen was nice and sharp and was pretty kind on my eyes.

Dangerous curves – as the 14 Beats Edition has a curvy metal casing she weighed in at 2.58kg. Some may find that too much to handle but compared to my gaming desktop replacement I found the package reassuringly sturdy and not much bother to cart around.

Port-rait of Tracy – Around the edges you’ll find an Ethernet port, a mini DisplayPort, an HDMI output, three USB ports, one of which doubles up as an eSATA port, a DVD rewritable drive (not Blu-ray) and 3.5mm sockets for headphones and a microphone.

Call me picky but this is obviously a premium lappy yet no Blu-ray? Also the lack of VGA/DVI outputs kinda limits hooking the thing up to a monitor – I generally work with an additional monitor attached to my laptop when at home to run recording software or just to have my main work screen with my social networking/email stuff running on my laptop which has a 17″ screen!

Oh, There’s also a webcam stuck on the bezel just above the display for Skype, Chat Roulette and such larks.

See me, touch me – The keyboard, once I got used to the flat keys, is fairly comfy. I was worried at first when struggling to see the keys when the daylight was fading (dark red text on black keys not that great to see) until I realised that the keyboard has a sexy red backlight.

Let’s dance – As you can imagine, the Beats Edition has some added sonics (although not the mixing/recording software of the larger models). The in-built front facing speakers are very decent for their size and quite punchy. Clicking [fn] + [b] adds or removes the Beats bass end, you can also expand the Beats equalizer hidden in the right-hand side of the task bar where you’ll find some pre-sets as well as space for a custom EQ of your very own. Naturally, the sound from the laptop through the bundled Beats by Dr Dre Solo cans was enough to get my head bopping whether it was Weather Report, Weezer or Wu-Tang.

One niggle is that when using the volume control buttons it automatically brings up an onscreen volume bar that bumps you out of full-screen games/vids.

Inside – Evy had plenty going on, she was rocking an Intel Core i7-Q820 CPU mated with 4GB of DDR3 RAM. Yeah, that’s what I’m talkin’ about! To make everything purty she was sporting an ATI Mobility Radeon HD5650 graphics card. With those vital stats HD video wasn’t a problem and, after getting my Valve account set up on her, most games would be playable – granted the latest titles may need the graphics settings dialed down a tad but hey, this aint a gaming puter. She’s all about the media – again, still slightly confused about HP skimping on Blu-ray.

There’s a 500GB 7,200rpm hard drive on board too which should give you enough room for your music and vids on the move.

The power of love – I managed to get around 3 hours out of the battery in general usage which I think is fair, I liked the fact that the slim power brick had a USB charger built in which was handy. On the subject of USB – the ports on the side of the laptop were a little close and I had to remove my external hard-drive in order to plug in a USB stick – not a major problem but there it us.

Is this love? – There is plenty I liked about Evy. Yeah, the way she looked but it goes deeper than that. The boost in sound quality courtesy of Dr Beats not to mention the added bonus of Dre’s Solo bundled headphones. The graphics should keep this laptop usable for a while to come and where it isn’t a gaming rig it will tackle almost everything else you ask it to do in the realms of chucking polygons about. I found the Envy 14 Beats nice and sturdy and was happy to lug it around – no hernias but plenty of knowing nods when opening her up on a Starbucks table. That sounded a bit wrong didn’t it?

If I was to highlight her blemishes it would be the lack of VGA/DVI out and the refusal to spin Blu-rays. Why Evy? Why?