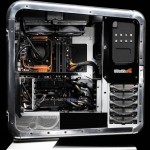 I heard about this monster and that was well over a year ago.

Finally, the Blackbird 002 from HP has finally flown the nest and landed in the UK – does it deserve the name that it shares with a powerful Honda motorbike and the fantastic spy-plane otherwise known as the SR71?

Well, the recipe looks promising as The Blackbird is loaded with HP technology as well as Voodoo DNA (Voodoo is well known for its own gaming machines and is now owned by HP).

The design has been pretty well thought out with its aluminium chassis, internal water cooling system as well as the tool-less architecture, which means that the owner can add new components without resorting to wielding the screw driver and soldering-irons.

If you wobble down to Harrods you’ll see the version loaded with an Intel Core 2 quad processor, two 500MB ATI Radeon HD3870 dual GPU Graphics cards, 500GB, and five internal hard drive bays if you want to add more memory…..of course you do! 🙂

Prices start at Â£3199 for this gaming beastie and it also comes with a 1 year warranty.