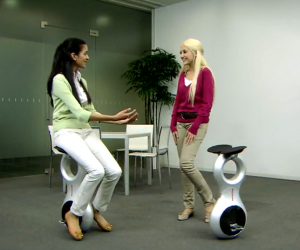 Cast your minds back to the futuristic self-propelled bar stool that his Honda’s U3-X Mobility Robot.

Its portability and ability to scoot you around effortlessly in any direction is pretty unique and makes the Segway look bulky and clumsy.

Honda has just released a new promo video on its official YouTube channel.

As well as sporting that clever omni-directional wheel system that was developed from Hondaâ€™s ASIMO robot project I now have more details.

The prototype weighs just 22 pounds, can stand by itself and features a foldable seat and retractable footrests. The company claims that the U3-X can run continuously for an hour on a single (lithium-ion) battery charge and can be recharged via a conventional 120-volt power outlet.