Honda P-NUT is Most Savoury 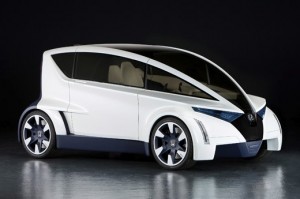 Ahem – you’d better not be thinking beer if you’re going to use this P-NUT from Honda.

This is the Japanese manufacturers glimpse into the future and there’s not even a snack-tray in sight.

The Honda P-NUT (Or Personal-Neo Urban Transport) has just been unveiled at the LA Auto Show and, like so many other concepts, is specifically designed to be â€œideal for use in cities and tight urban areas,â€ – in other words it’s designed to be stood in traffic and squeeze into parking bays that are actually too small.

Honda has opted for the central driving position option which has been seen before but I’m digging that modular engine slot which means you can take out that battery-powered motor for some old-skool petroleum spirited horses.

I quite like the futurist exterior but when you get into the drivers seat you’ll notice the lack of dials, just a speedometer on a stalk which may be multi-use but the P-NUT uses the windshield as a display for navigation, and can even dish out picture in picture views from the rear camera.

Word is that this is just a concept and is likely to remain so – but would you be proud to tell your buddies in the pub that you arrived in a P-NUT?