Holographic staff projecting themselves over here and stealing our jobs! 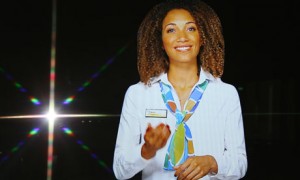 Local council staff in Brent are about to become even less substantial and probably look right through you more than usual due to the council’s latest addition – a holographic receptionist called Shanice.

The hologram, played by actress Shanice Stewart-Jones, is only programmed to answer a limited number of questions. Dare I say, just like the real thing? 😉

Shanice will be able to tell visitors where the correct part of the building is to register births and deaths or apply for a marriage licence or citizenship and where the toilets are.

Brent said that the hologram will sit “behind a desk just like a real receptionist, but on closer inspection she’s actually projected onto a see-through screen”.

Shanice cost in the region of £12,000 to implement, which means she should work out cheaper in the long run than hiring an actual person to sit there greeting lost pensioners all day.

Opposing Lib Dem councillors claim Shanice is a “startlingly expensive” way of improving signage inside the council offices, but Brent council leaders claim it/she is a great way of saving money, and seem to hope she’ll become a tourist attraction, with leader member James Denselow saying: “I hope people come down and visit her the next time they’re in the Civic Centre, she looks great and she’s always very friendly.

I wonder if this could possibly be the way London Underground will go once the plans to rid stations of their ticket offices goes ahead. Mind you, I can’t see a hologram being very effective in preventing vandalism, etc.