HECTOR the Hexapod – Walks, Learns and Could Carry Your Kids Away! 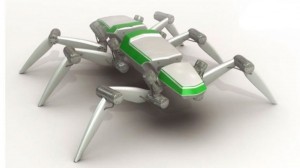 HECTOR the robot – sounds cute eh? Well, this HECTOR happens to be based on an insect so it depends where you stand with creepy crawlies.

HECTOR the hexapod cognitive autonomously operating robot was designed by Germany’s Bielefeld University to help the boffins there to understand how exactly real animals manage to move gracefully – especially ones with more than a pair of legs.

HECTOR is rockin six legs, with 18 joints in total – all those extend from an exoskeleton made of carbon fiber reinforced plastic.

Those legs have been blessed with a life-like range of motion thanks to a special set of “elastic joint drives” and a series of “biologically inspired” algorithms.

That body can actually be loaded with up to 30 kgs with the bug bot only weighing a 12 kilos.

HECTOR aint no dummy either as this hexapod actually learns from its experiences.

Now, is it just me that is starting to get a bit wary of HECTOR? You have a robot insect that is capable of learning and can drag around three times its own weight back to its lair…

Check out the vid below.