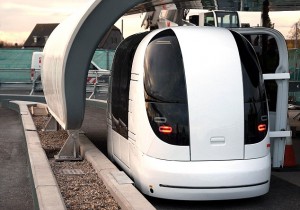 Welcome to the future – now!

Well, if you happen to be using Heathrow Airport‘s Terminal 5 anyhow.

Heathrow is set to get 18 PRT (Personal Rapid Transport) vehicles – or driverless taxi’s to the rest of us.

Poor ol’ Fast Company find them a little “creepy” but I think these look cool as!

The four-passenger personal rapid transport (PRT) vehicles, unveiled this week at the Science Museum in London, take airport-goers on a special narrow road from Heathrow’s Terminal 5 to various parking lots. Passengers use a touch screen to type in their destination, press a start button, and the battery-powered vehicle zips along at 25 mph to their destination. There’s a reason the pods look so futuristic – they were designed by Mark Lowson, who worked on the Saturn Rocket that launched Apollo missions.

Those 18 PRT vehicles will be used in the initial Â£25 million Heathrow run, but if all goes well, BAA will invest an additional Â£200 million to expand the system to include hotels surrounding the airport terminals.

You never know – this kind of transport could even provide an alternative to city-bound buses and trains – but probably not.

So – creepy or genius?