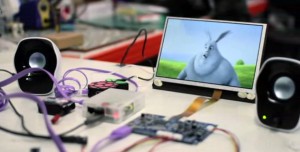 If you’re looking to add a cool little screen to your Raspberry Pi project or just watch some HD video on your barebones machine then you might want to check out HDMIPi.

Some British Pi fans have come up with the HDMIPi which is a simple, low-cost screen with a 1280 x 800-pixel resolution.

So, a HD screen for £75 to hook up to your Raspberry Pi? Brilliant.

HDMIPi is the brainchild of RasPi.TV blogger Alex Eames, who’s partnered with Cyntech and Pi logo designer Paul Beech. They’re asking for your cash via crowdfunding site Kickstarter, with the aim of funding a 1,000-unit initial run.

The funding target has already been blown out of the water, so the plan will definitely go ahead.

Delivery is estimated for February next year, but might be pushed back, if things don’t go as planned.

It’s not your usual TV either – this is as barebones as the Pi itself. £75, the base price, bags you the screen, the driver board and a plastic case, but an extra £28 will give you a stand, a power supply, and an SD card with software installed so you can plug in your Pi and use the screen straight away.

You can also pay £128 for all of the above, plus a Cyntech case and USB and HDMI cables. Those are very limited offers, although it’s possible the project may add more options.

It’s a shame that none of the options includes a TV tuner but then that’s the whole point of the Raspberry Pi isn’t it? To get creative with stuff and surely a HD monitor has got to help?