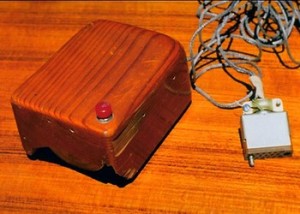 Even though it has since lost its wheels and many have no tails (wires) they’re still pretty much the same asÂ they’ve always been – even though its demise has been predicted.

It was created by Doug Engelbart and his team at the Stanford Research Institute in California and was a controller housed in a carved wooden block with wheels on the bottom and a wire out the front which later migrated to its more familiar position.

Someone called it a ‘mouse’ as a joke and the name stuck. He said:

‘We thought that when it had escaped out to the world it would have a more dignified name. But it didn’t.’

His first mouse was up and running in 1968, and was first shown to the public in a demo on December 9 that year. (The vid clip below)

Xerox developed the mouse in the 1970s, launching it alongside the Xerox Star computer in 1981. It didn’t exactly thrill the world but when Engelbart’s patent ran out Apple snapped up the rights from Stanford for $40,000 – cunning huh?

It was then launched alongside the Mac in 1984.

Then the PC users picked up on it and the rest, as they say, is history.

Check out a vid clip of part of the first test 🙂