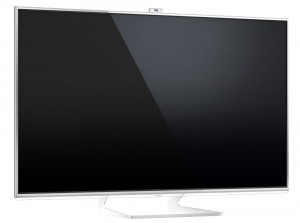 Not that you have to get close to a 65-inch television but how could I turn down the invitation from Panasonic to spend some quality time with their Smart VIERA WT600 UHD TV?

There is no denying that the Panasonic Smart VIERA WT600 4K TV, which was officially launched 2 weeks ago, is stunning to see in the flesh and, thanks to its embedded H.264 decoder, it will happily run 4K content straight off an SDXC card and stream Ultra HD content from the internet – you are recommended to be on 30meg fibre broadband if you want to do this else your viewing will suffer from some serious juddering when it does eventually load.

Consequently, this is the only 4K screen available that can currently claim to be future-proofed when it comes to 4K UHD broadcast standards. Not only that, it is also the first LED TV to get the 4K THX certificate in Europe.

Design-wise, the TX-L65WT600 (to give it its full alphanumeric title) is clothed in a slim chrome bezel and has a thin plastic lip running across the bottom which is illuminated for that extra added dose of slick. 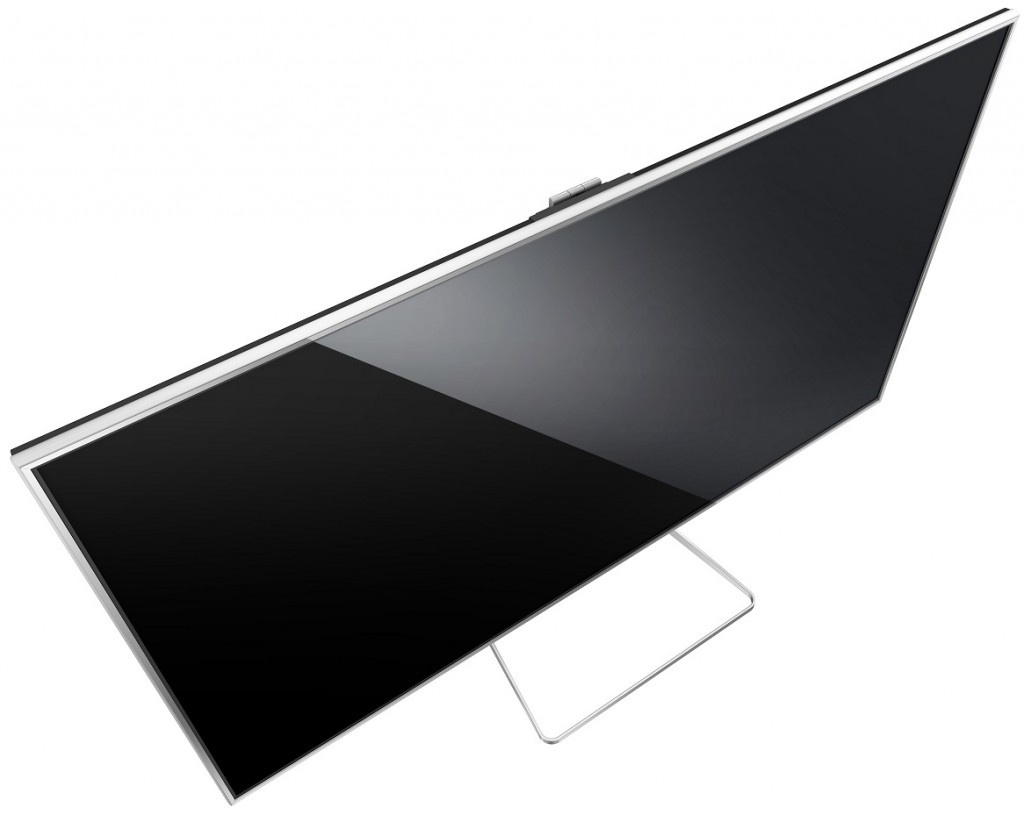 I was pleasantly surprised to see that this 65-inch panel has a remarkably minimalist footprint. The set is just 56mm thick, or thin depending on how you look at it. The reason why the WT600 can get away with such a skinny bezel is because it’s not having to house any speakers. The sound system comprises of downward-firing 18watt “invisible” stereo speakers and a rear-facing woofer.

Get on your tippy toes and you’ll see the outline of the pop-up webcam (it’s easier to see when its popped and then it can see you too!) that’s hidden away when it’s not in use to keep the design looking smooth. That webcam is there for face recognition as well as your Skype chats – that’s if you want to see your Auntie in glorious ultra high def…

You get a brace of remotes: a standard IR thing which is as functional as it is bland and a Bluetooth touchpad with integrated microphone for voice commands. 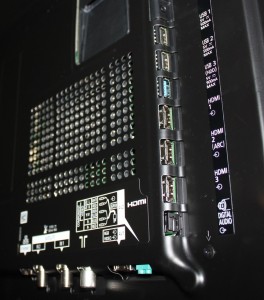 Around the back the jack pack includes four HDMI ports (HDMI port 4 is where the 2.0 connection lives – the far left port at the bottom), Scart and component/composite inputs via adaptors, three USB sockets, Ethernet, an SD card reader, optical digital output and the aforementioned DisplayPort 1.2 input. Wi-Fi is also integrated. I’m pretty sure that this list covers every thing you’d want to shove in to your TV.

The set also sports multiple tuners. You can opt to run twin Freeview HD, or paired Freesat HD. This duality enables the screen to offer a picture in picture (PIP) of a second channel when browsing channel listings, as well as record one channel to an external USB hard drive, while you watch another channel.

The panel is also 3D enabled and uses active shutter technology. You get Two pairs of the special active glasses bundled in with the package. 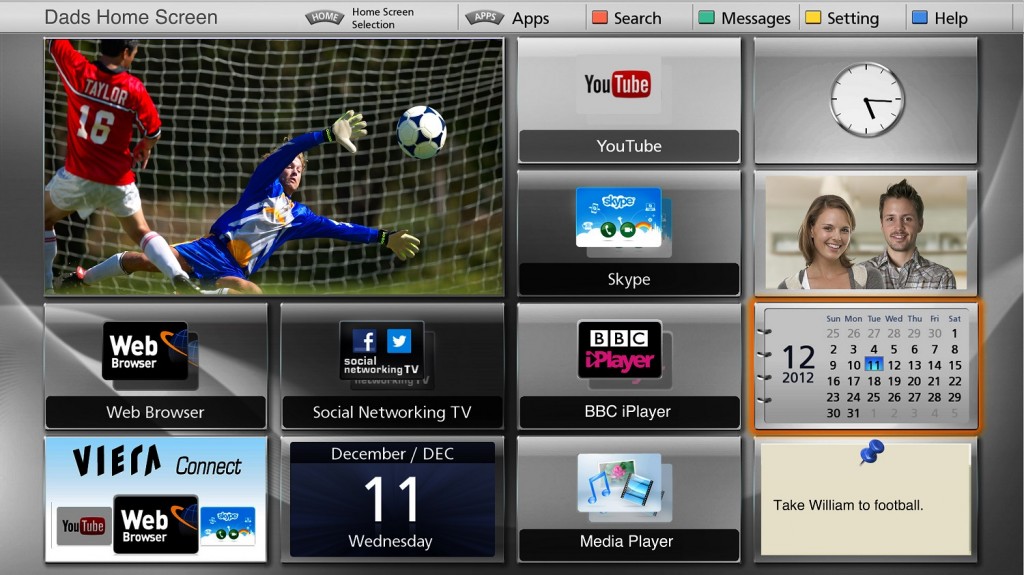 I was pretty impressed by Panasonic’s customisable start page, known as My Home Screen. What made it even more special is that you are able to access this by talking to the remote which then activates the aforementioned camera to pop up (look closely at the first picture at the top of this review), which then gives you a cursory glance and, upon recognising your face, will then present you with your own personalised Home Screen.

Obviously this is not done through magic and unicorn tears. You have to have your ‘face’ stored and have created your Home Screen with your choice of content and app shortcuts as well as personalised wallpaper. You can even use photos from an inserted USB or SDcard. The only issue there is that the telly wont store that snap so, if you remove the flash memory, then your pic goes with it.

What was noted is that, despite this being a rather fab connected interface, Panasonic offers a fairly limited choice as far as catch-up viewing is concerned. Beyond the ubiquitous iPlayer, the choice is mostly video-on-demand (VoD) services such as Netflix, Crunchyroll, Woomi, Wuaki and Viewster.

That said, the WT600 has a 4K native web browser so you get to explore using ultra-high definition Google Maps and even the 4K video channel on YouTube. As 4K content starts to get more and more popular this could be the perfect access point.

If you’re playing media from a flash drive or external HD via USB the Smart VIERA WT600 will play nice (at 30fps) with a whole heap of triple charactered codecs such as WMV, MKV, MP4, AVI, WMA, MP3, AAC/M4a, and FLAC. Apparently it would’ve been easier to say “all the expeceted file types except MKV”. But where’s the fun in that? 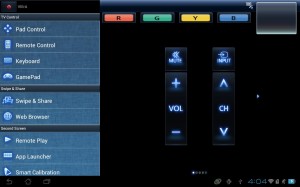 The Panasonic TV Remote 2 app also hands you calibration tools as well as the usual remote control buttons. The app is available for Android and iOS devices. 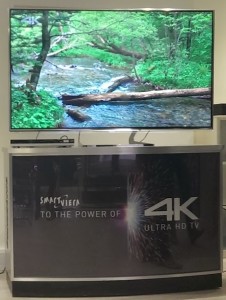 The short version to this is simply, wow!

Now, I am guessing that you’re expecting a bit more from me than that so, needless to say, I found that the WT600 is a sensational looking and performing 4K screen. It doesn’t matter if you’re looking at an 8MP still shot or marvelling at its UHD pixel packing smooth presentation of video.

It is just a shame that there’s not much native 4K content available in the UK at the moment. You can impress your friends by tuning on to the Panasonic 4K Channel app just to wow them but I am not sure how long they’d stay impressed by the lovingly captured images of water and exotic places.

The thing is, this is all part of the future-proofing of this tellybox. It’s looking as though UHD at 50/60Hz will soon(ish) be the broadcast standard with Netflix and other commercial services in 2015. OK, so that’s a year and a bit away and we’re still waiting for 4K Blu-ray to decide on a codec for their triple-layered discs but when it arrives it’s sure to be a beautiful thing.

As I mentioned before, the WT600 is THX 4K certified, and features decent THX Cinema and Bright Room modes amongst its many presets. The set’s picture balance is pretty good straight from the box.

Dark level performance is uniformly good and the colours are really vibrant but I didn’t get the opportunity to test out the WT600’s 3D chops.

While we wait for 4K broadcast services to materialise, it’s clear Panasonic also sees massive potential for this panel with hardcore PC gamers. An increasing number of high-end graphics cards support 4K and when used in conjunction with PC titles supporting a high frame-rate the results can be mesmerising. The run though of Project Cars, for example, has amazing fluidity that had me mesmerised. 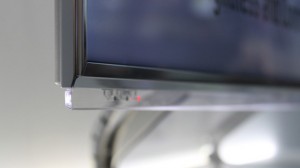 If I was to be perfectly honest, I wouldn’t be buying a WT600 on the strength of its audio performance alone and Panasonic would probably be one of the first to agree. It is packing that hidden 18 Watts of output (2 x 4W + 10W woofer) which, and don’t get me wrong, does the job but the thinking behind this is that if you’re going to spend this much on a gogglebox then, chances are, you are more than likely to be equipped with a decent home theatre set-up already.

Besides, if they were to shove some decently powerful sound slingers in to this top-end telly, then you’d have to kiss this kind of thinness goodbye.

The Panasonic TX-L65WT600 is the first next-generation (if that makes sense) 4K Ultra HD TV that offers future-proofing straight from the box. And that makes it the best 4K TV out there that I am aware of.

The only real downside I can see with the Panasonic Smart VIERA WT600 is the price. Sit down and take a deep breath.

You can go down to your high-end television peddlar and buy one of these right now for the princely price of £5,500. Bargain. But at least you won’t have to buy another in a year or so, thanks to the future-proofing. Surely that’ll win the argument should you be challanged by your partner on your choice of 65-inch TV?

I think your money, if you can spare it, would be well spent if you picked this set.