Hands on with BlackBerry PlayBook in full HD Multitouch Action 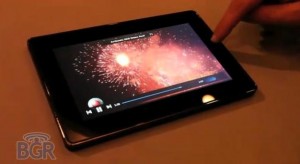 Those lucky so-and-so’s over at Boy Genius have posted a hands-on vid of the much anticipated BlackBerry PlayBook.

We get to see the 1080p loveliness and nice touches such as multitasking and multitouch bezels. Mmmmmm………. tasty.

Also see how easy it is to hook up your BlackBerry blower with the tablet.

If you’re an app developer and fancy a PlayBook for free…. submit a PlayBook app to BlackBerry World and if it’s accepted; Robert’s your mother’s brother – there’ll be a free PlayBook in the post as soon as they’re released 🙂

All the whispers point to the The BlackBerry Playbook to launch in spring 2011 – in the same week as the expected Apple iPad 2.

Enjoy the RIM love below and let me know what you think: