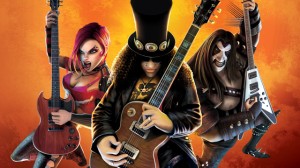 It was only February when news arrived that Guitar Hero was found dead in its hotel room but now it sounds like Activision is currently working on the next installment to the Guitar Hero franchise.

Activision Blizzard CEO, Bobby Kotick, let slip that a new Guitar Hero release is being worked on behind the scenes when he was chatting about how the team failed the music simulation series.

Kotick went into regretful detail when he discussed The Downward Spiral

that the Guitar Hero titles took before they had their amps witched off: “We didn’t really take the time that we usually take to understand audience behaviour.” He added: “It was one of those things where we were resting on the idea that one of the essential fantasies of video games is to unleash your inner rock star.”

DJ Hero didn’t fare much better as he went on to reminisce: “We should have said, ‘Well, how many people really want to unleash their inner DJ?’ And then out of the people who do want to unleash their inner DJ, how many want to do it in the context of a game where you earn points, versus just taking a DJ deck or tools on their Macintosh and actually being a DJ? And it turns out it’s a very small market,”.

Would you welcome this come-back or are you happy with the memories? Could your house parties do with some more air guitar?