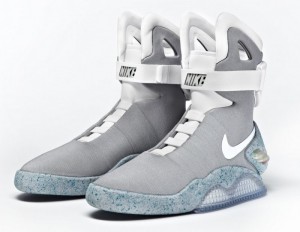 If you follow GadgetyNews on Facebook you will have seen the teaser trailer  – now Nike has officially unveiled the legendary replica trainers as worn by Marty McFly in Back to the Future Part II.

1,500 replicas of the famous self-lacing Nike Mag will be produced and sold on eBay where sales proceeds will go to the Michael J Fox Foundation for Parkinson’s disease research.

The Air Mags are the first rechargeable pair of Nike trainers ever made as well as being exact replicas of those in Back To The Future II — but without the power laces. Boooooo! 🙁

They have the same upper contours, glowing LED panel, and electroluminescent Nike logo in the strap. Pinch the ear of the high top and they’ll illuminate, glowing for 5 hours per charge. Yay! 🙂

The futurist kicks are being sold through nikemag.ebay.com, with all the profits going to the Michael J Fox Foundation, a charity whose aim is the eradication of Parkinson’s disease.

The Back to the Future Nikes will hit eBay at 150 pairs every day until 18 September.

The auction kicked off today at 12.30pm UK time.

Google co-founder Sergey Brin and his wife Anne Wojcicki pledged to match all donations to the Michael J Fox Foundation up to $50m through to the end of 2012.

MJF said: “This project is exciting to me because it brings together three very passionate audiences: the Parkinson’s community, the sneakerheads and the Back To The Future fans,”

Mark Parker, Nike CEOannounced: “We wanted to translate the excitement people have for the ‘greatest shoe never made’ and for Back To The Future into positive action. But the long term objective is to raise awareness so the Foundation can achieve their goal of eradicating Parkinson’s disease.”

Prices are already reaching US$5000 dollars – great news for the MJF charity!

As well as the price, however, there’s some bad news for regular fans in the UK – Bids are limited to US residents.