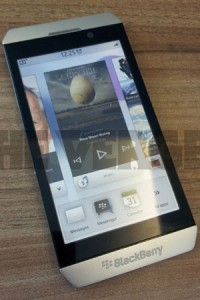 BlackBerry has a capital touchscreen phone waiting in the wings and it looks mighty fine if you ask me – mainly because it doesn’t look like a RIM handset – more like something direct from the Porsche Design centre which did a decent job with the BB-based Porsche P’9981.

Not only is this BlackBerry a departure from the usual RIM-ware it is also rumoured to be the first phone running the QNX operating system. Could this actually be the lauded BBX OS when it actually arrives? Well it certainly fits with the keyboardless plans that RIM have previously mentioned 😉

The BlackBerry London is said to be packing a TI OMAP dual-core CPU running at 1.5GHz which is buddied by 1GB of RAM.

Snaps come via an 8-megapixel rear-shooter and a 2MP number up front which will store their results on the 16GB of onboard storage. Whether or not you’ll be able to boost the storage capacity via SD cards is yet to be known.

It’s not often that I use the words ‘BlackBerry’ and ‘Gorgeous’ in the same post but I really dig the London’s minimalist and clean design. Don’t you? It has a touch of the new Nokia Lumia 800 about it but with Porsche tweakage I reckon 🙂

The burning questions really are: is this just a concept? Is this another actual Porsche Design RIM phone? Is this just someone’s idea of a joke?