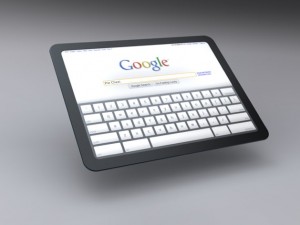 My Geekahol partner and brother, Chris, and me had a bit of a tablet-based debate this morning via email and this fella cropped up into the conversation.

First spotted was pics showing the Chrome OS that have been posted on the official Chromium site (Chromium is the open source project behind Chrome and ChromeOS).

I think it’s pretty much a given that there’ll be more than one version of the Google tablet (gAblet?) as I can’t see all this work going into the Chrome OS only to be tied to a single device.

Think Nexus One and the Google Phones – this may be the path paved for any Google Tablet. Rumour is that Google is in talks with HTC about making a touchscreen tablet device already.

Now there’s a video of the gAblet taking care of multitasking on a single screen that seems rather large in this vid. The original word was that the screen would be between 5 and 10 inches.

Apple will no doubt be keeping an eye on the designers multi-touch gestures and a hideable â€˜dockâ€™ of program icons.

The concept video has been put together by Glen Murphy, one of Google’s Chrome OS designers.

The fair point made by my learned brother is that no matter the failings of the iPad (of which there are a few that seem easily fixed in version 2 – there’s already cut outs for a camera and the software is ready to support phone calls for example) at least you can walk into any Apple Store and get assistance and even try Apple products out before buying them.

Would you opt for a gAblet or an iPad given the choice?