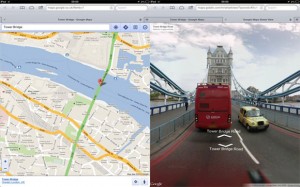 With owners stating that the iOS 6 is less satisfying than iOS 5 Apple’s Maps app has taken a real slamming with people wanting Google Maps to make a comeback.

Google has heard the cries and have now added Street View to their Maps web app for the Apple operating system. This means that you are free to take a virtual wander wherever you like from your iPhone.

Google Maps Street View works the same on iOS as it does on your puter – get a map of your desired area up on the iPhone browser and drag the little orange person from the corner and plonk it where you want to have a pootle around.

It works in Chrome and Safari so far, there’s no word on other browsers as yet.

Apple infamously dropped Google Maps in favour of its own home-brewed iOS 6 navigation app, along with ditching the other Google-owned service, YouTube.

Embarrassingly, Apple’s version has been an utter disaster with CEO Tim Cook forced to make a public apology via the Apple website.

Google chairman Eric Schmidt said work hadn’t started on a Google Maps app for iOS – but another contradictory report claims it’ll be out before the end of the year. Hmmm….

If you would like Apple Maps to suck less, head over to the Settings menu, select Maps, and go to Label Size. Click Small, and a lot more labels will show up on-screen. Those streets Apple deemed too narrow to warrant space on the map will now appear, and place names won’t be obscured by points of interest.

This doesn’t use up any more network data.