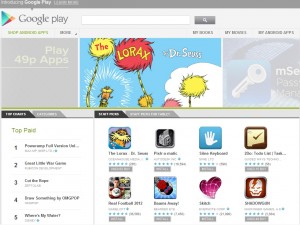 Google has been busy these last couple of years sorting out its content distribution channels for Android and now it has a rebranded Cloud-based service called Google Play.

The new cloud-based media platform is a “comprehensive digital entertainment service” and has already gone live!

The Android Market which most of us will be familiar with will be replaced with a Google Play application. Android’s official video, music, and e-book applications will be re-branded in order to fully integrate with the Google Play services.

Google says that users will always be able to access their previous purchases through the service and easily get their purchased content onto new devices.

Don’t worry though, the new name won’t change how you get to those services you know and love on your phone substantially.

When you poke around your Android device you’ll be able to access all that information as Google Play: Google Play Music, Google Play Books, you get the idea.

The main difference is that while your phone or tablet will still have the music, movies, books, and apps you originally downloaded; you can launch the media you buy and download directly through the Google Play app.

Google is offering discounts on movie rentals, books, and music for the next 7 days in celebration of Google Play going live.

When your turn comes for the update the app formerly known as the Android Market will get an automatic over-the-air upgrade. This effectively erases the Android market app and installs Google Play, where you’ll have to accept four different terms of service for the Play app, the Music app, the Books app, and the YouTube Rentals (now known as Movies) app.

With Google Play, you can purchase an app on your desktop computer, decide which device to send that app to, and that app will automatically install on your chosen device. You can’t, however, play games through the Google Play Website (boooo!).

The Books section of Google Play does do the clever ‘pick up where you left it’ trick unlike the Movies portion.  Start a book on your phone, close it down and then open it back up on your laptop and start back at the point you were before. Brilliant! 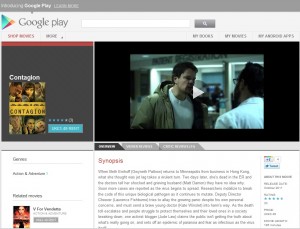 Google’s Movies app lets you rent most movies for 24 hours for around £3.49.

Play does let you watch that movie from any device which is a good start. It would’ve been awesome if you could pause the video on your monitor and, when you reopened the same flick on your phone, started where you left off. Unfortunately, you will have to fast-forward in an old skool way to get to where you left it.

No huge changes here from what I can see.

Upload music from your personal library, or make a purchase on any desktop, phone, or tablet. The songs or albums will upload to all devices.

This is another area where you can’t pause and expect to play it from that point through the Google Play Website.

When you purchase music, you can share one free listen of your purchase with your friends.

Have you tested Google Play out? Do you like it or hate it? Personally, I like how it looks and after a brief Play around (arf!) I have to say I dig it. Not a huge move but a good move.

Have you noticed any real difference?