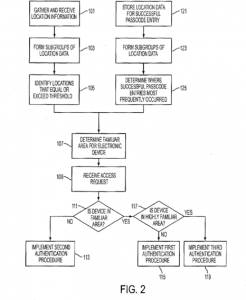 Google has submitted a patent application that would make the system of unlocking a device much more intelligent, using a smartphone’s built-in sensor to change your security settings on a sliding basis depending on where the phone is.

The Google patent would allow a user to customise the unlock settings so that the device would be easier to unlock at home whilst making it more difficult to access when the device is out in public.

The idea is that it would make it harder for a stranger to access your phone and its data when it may be easily stolen or being used in a public area.

As accessing secured devices could detract from the user experience it would be nice to have the option of a multi-level unlock when using your smartphone, tablet or laptop when out and about, but have little or no security when in the relative safety of home – just so that it was more convenient to get in to it.

The patent as described also contains a provision that would allow for a third authentication method to be set for a second so-called “familiar area”. This would allow for a number of different possibilities, like setting different levels of security for home, work and then everywhere else, for instance.

It’s a handy and noteworthy wrinkle in the patent app, since it could also make it possible to essentially set up a specific security profile required in professions where on-site security of data and mobile devices is paramount.

Personally I like the idea of zoned security, but is this really a new idea?