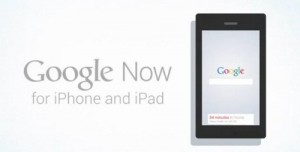 Google is bringing its overly clever Google Now service to the iPhone and iPad – so says a leaked promotional video.

Google Now uses all the knowledge of Google to show you relevant information based on things like your location and search history. When you leave the house and flick open Google Now it can tell you what the traffic looks like. Sit down in a restaurant and open the smarty-pants app it will tell you the highest rated dishes.

Google Now started life as part of Android Jelly Bean but it looks as though we can expect it to land as part of Google’s existing Search app for iOS.

The video was spied by Engadget and quickly taken offline, but not before they nabbed a copy 😉

Although Google is yet to say anything official on the subject, the video is pretty strong evidence that the Big G is poised to challenge Siri on its home iOS-flavoured turf.

I’m not sure if this is a good or foolish move for Google, though.

On the one hand, as an iPhone owner, I look forward to testing Google Now out on my Apple smartphone – but, after trying it out on Android devices, Google Now could be another strong and unique reason to go Android.

The only difference I can see is that, on an Android device, you can pin a Google Now widget to your homescreen so that you can get information from the eerily clued-up service without opening the app. Thanks to the locked-down nature of Apple’s operating system – this will not be an option on your iPhone or iPad.