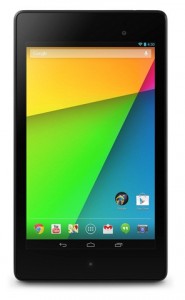 The new Google Nexus 7 has been officially announced. Read on for specifications, release dates and UK pricing.

The next-gen Nexus goes on sale in the US on 30 July. It then comes to 8 countries, including Britain, Canada, Germany and Japan, “in coming weeks.”

It’s expected that we’ll get the Wi-fi versions here in the UK, but not the 4G model – at least for the time being.

The new Nexus 7 is built by Asus and has a 7-inch, 1980×1200 display – the world’s highest resolution screen – that offers almost double the pixels per inch than the iPad mini.

It also has also been given that 5MP rear-facing camera that has been seen in leaked pics, and a faster quad-core 1.5Ghz processor compared to the first-generation Nexus 7 device.

The new device also manages to 2mm thinner than the original’s 10.5mm design.

According to PC World, the first British shop to reveal prices and dates for the new 7-inch Nexus tablet, prices will be £200 for the 16GB model, and the 32GB version is £240.

Not exactly the bargain-tastic tag of buying the original Nexus 7, which costs £160 for the 16GB model and £200 for the 32GB version. I guess that’s the price of adding a 5-megapixel camera and super-swanky screen.

Even with the price-bump it still undercuts the the similarly-sized Apple iPad mini, which starts at £270.

The tech retailer also states that it won’t land in stores til September 13th – that’s a bit longer than a few weeks.