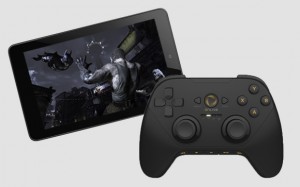 The whole thing about OnLive’s streaming games is genius. No matter what piece of hardware you have, even a telly, you can get your game on. Touchscreen controls don’t really cut it in my opinion but how about hooking your Google Nexus 7 tablet, which lands in the UK this weekend, with a wireless controller?

When OnLive landed on Android it was both a beautiful and frustrating thing. True, you could get top titles to play but the rejigged touchscreen controls meant you were losing something as well as gaining.

Personally, I’d love to slap the Nexus 7 and the OnLive wireless controller together in one lovely gaming sandwich – this could be a gorgeous joining of Gadgety gaming joy!

Looking at the cost of this mobile gaming twosome: the OnLive controller costs £39.99 – not bad for a wireless, Xbox-like pad which will happily guide you through myriad titles available on the cloud streaming service. Google’s Android 4.1 Jelly Bean-powered Nexus 7 has access to OnLive through the dedicated Google Play app so that’s sorted already. The 7-inch, 1280 x 800 HD display, paired with the Tegra 3 quad-core processor should produce gorgeous gaming and, compared with the likes of the Sony PS Vita which has just been dropped to £169,

I think it’s fair to point out at this juncture that there’s, as yet, no OnLive app for iOS 🙁

OnLive’s official statement reads: “We don’t have support out for [the Google Nexus 7 tablet] yet, but we hope to shortly.”

So, for less than £200 you could have yourself a portable games console that’s totally able to play all the top titles, as well as a quad-core Jelly Bean tablet?