Google Nexus One is Here and so is the Google Store to Sell it! 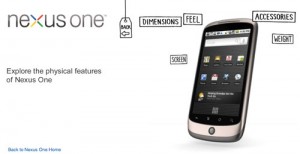 When Google decided to sell their own Android blower, the Nexus One, almost as many column inches were given to how they’d do this as were given to the actual handset.

Well, they’ve opened a new store, from which they plan to sell Android phones from a variety of carriers and manufacturers.

This will be a one-stop-shop for your choice of Android mobile.

There’s nothing really new about Google.com/phone but by bringing all those phones together it shows that Google may have been getting concerned about having bits of Android dotted about the place. Having it all centralised should strengthen the brand identity as well as making the punters life a little easier.

The Nexus One has obviously gone all official now and the pricing seems to follow a familiar format: $180 on contract with T-Mobile, $530 unlocked, both available through that new online store I’ve just been chatting about.

So, what’s the specs and stuff?

The camera is a 5MP number paired with an LED flash. It can take MPEG-4 video which can be fired off to YouTube with one-click.

The trackball’s got a natty multicolour LED for different notifications, and it would be silly not to have a compass, GPS, Wi-Fi, stereo Bluetooth or a 3.5mm headphone jack. Thankfully it has all those 🙂

You also get two mics for “active noise suppression,” light and proximity sensors, and an accelerometer onboard.

It sounds like Europe (inc UK?) will get the Nexus One for 450 Euros for a contract-free device or 200 Euros if tethered to a two-year Vodafone contract.