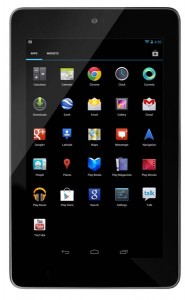 The Google Nexus 7 looks like it’s going to be pretty decent, even though we in the UK will have to wait longer for some content. The good news is that it should be here soon – very soon. Tomorrow!

That was the breaking news earlier – it appears that some lucky pre-orders from my favourite place to by computer bits online, Ebuyer, had been updated to have a delivery date.

Even better was the fact that the Nexus 7‘s had been marked as shipped and was scheduled to be delivered on July 13th – tomorrow!

The product listing on the site also confirmed that if you buy within the next eight hours or so you can have it delivered this Friday.

This must’ve been more than a little annoying for those who ordered directly from Google itself as there was no word when to expect theirs.

The smugness stopped later in the dau, however, as Ebuyer flicked the Nexus 7 status back to “pre-order” with the site now indicating that the Nexus 7 will be available on July 19th.

Did you happen to pre-order from Ebuyer? Let me know what’s happening 🙂