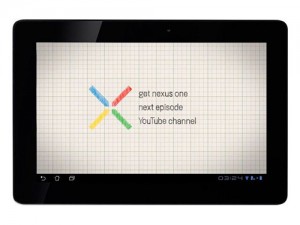 The interwebs are ablaze with news that Google is set to challenge the likes of Apple and Amazon by launching its own range of tablets.

The planned Google tablets will proudly carry the Google name much in the same way as the Google Nexus One did when it entered the smartphone market.

I know what you’re thinking – there is already plenty of Android tablets to choose from so why would a Google branded tablet make any difference?

First off, even though the slates will be emblazoned by the Google name, the Big G wont actually be providing the hardware for the tablets. That task will most likely be handed to renowned tech cobblers Samsung or Asus.

Samsung and Asus already make great Android tablets such as the Galaxy Tab 10.1 and Transformer Prime respectively but they also have the Android operating system skinned to suit their own personal tastes. The Google tablet will be pure G.

Also, the Google tablets will be sold directly to consumers through an online store, according to The Wall Street Journal; although there’s currently no word on when these tablets will hit the virtual shelves.

It’s a brave move by Google as it failed to get the results it wanted when it tried this strategy before when it joined the smartphone market.

The company tried flogging its first flagship phone, the Google Nexus One, through its own online shop, but gave up after just a few months.

Their reasoning to that particular hiccup was that other Android phones were already on a par with their own Nexus One and so Google was competing directly with other manufacturers.

To me this sounds as though Google is throwing down the gauntlet to other Android tablets and is preparing to show the world how it’s done – and possibly a lot cheaper.

Google also admitted that the online shop had, “remained a niche channel for early adopters”, and admitted that shoppers wanted a “hands-on experience before buying”. The fact that UK shoppers were purchasing from Google in the US is another point to bear in mind.

We’ll all have to wait to see if Google has learned from its past mistakes and to see if their own tablet will be a huge leap ahead from the crowd or just another Android tablet.

Perhaps they’ll push the Nexus Tablet through their new Play store as well as through physical Chrome Stores?

The fact remains that you could be buying a tablet without taking it for a test-drive. Would you?