Google Nexus 5 smartphone released – UK prices and all the details 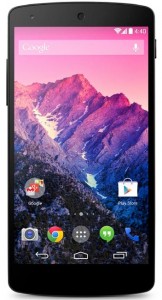 We have seen plenty of photos of the Google Nexus 5 and Android 4.4 Kit Kat over the last few days and the handset is official here’s all the details on Google’s new Android smartphone.

It would appear that the leaked Google Nexus 5 specifications were correct as the handset is loaded with the latest version of Google’s mobile OS, Android 4.4 Kit Kat and features a 5-inch display.

Powering the Google Nexus 5, is a quad core 2.3GHz Qualcomm Snapdragon 800 processor and Adreno 330 GPU with 2GB of RAM and a choice of 16GB or 32GB of built in storage.

The Google Nexus 5 is available in two colors, white and black – more on that below 😉

Buy the device from Google’s Play Store is the rule of thumb for UK comsumers, although Carphone Warehouse is also offering the16GB model for £295.

Alternatively, if you head to one of the usual UK carriers you may find yourself paying quite a bit extra.

The Nexus 5 seems to have already been quite the hit as Google has burned through stock, delaying the black version for a week for new orders.

Those quick off the mark last night should see their new phone ship in 1-2 business days, so it should hopefully be on its way today.