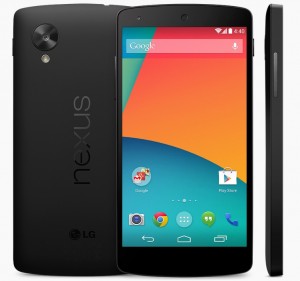 Although there’s still nothing official about Google’s next Nexus phone it seems that people have had a sneeky peek of the Nexus 5 thanks to the leaky Google Play Store.

The not-yet-announced Nexus 5 was listed along with the Nexus 7 and Nexus 10 on the Play Store today which not only gave us the first official snap of the next Googlephone, but its price.

The Google Nexus 5 is the next Android flagship smartphone, and it costs $349. The image here is the first official picture straight from the horse’s mouth, as the Big G accidentally revealed the Nexus 5 early.

The new phone appeared on Google Play, only to be quickly pulled from the site.

The listing carried the tagline “Capture the everyday and the epic in fresh new ways”, suggesting the Nexus 5 and its Android 4.4 KitKat software have some cool creative camera trickery up their sleeve.

Previous leaks have given us a good look at the outside while a service manual gave up the internal details of a 1080p 4.95-inch display, 2.3GHz Snapdragon 800 CPU, LTE and storage capacity that tops out at 32GB.