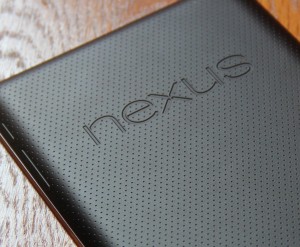 Word on the web is that Google could be about to drop Samsung in favour of Asus for their new Google Nexus 10 tablet.

Reports are suggesting that the next 10-inch Nexus Android slate will be built by Asus instead of Sammy which could mean that the Google tablet will come with a Retina display trouncing screen.

As you probably already know, Asus makes the 7-inch Google Nexus 7, but the current Nexus 10 is built by Samsung.

This looks to be about to change if we take this photo from Twitter tipster evleaks at face value.

If this pans out it would be great news as it means that the new Nexus 10 could well also keep the Infinity’s amazing screen. The eye-pleasing display chucks a lovely 2,560 x 1,600 pixel resolution at your peepers. The Asus slate also boasts a Tegra 4 processor with 2GB of RAM and claims 13-hour battery life.

That’s a lot of hardware for the Nexus line’s traditional affordable price. A previous leak suggested the new Nexus 10 would cost £349.

The new Nexus 10 should also be the first tablet to show off Android KitKat, the next generation of Google’s software for phones and tablets. It had been snapped running a new flavour of Android, back when it was called Key Lime Pie.