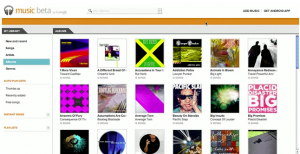 Google Music is now official, still as a Beta, but the cloud music streamer is here and ready to take on Amazon.

As Google still has to work through some things with record labels Google Music is more of a cloud storage facility for your tunes rather than a full streaming music service – at the moment.

So, upload the tracks your own using a Mac or PC and then you’ll be able to those tracks wherever you are using a straightforward user interface on your computer, smartphone or tablet. Google says they’re working on a music store but that’ll only happy when the labels are happy.

â€¢ Library Upload: With the Music Manager app, you can upload your iTunes or Windows Media Player libraries with one click. You can also upload by file or folder.

â€¢ Offline Listening: Google Music automatically caches songs that you’ve recently listened to – so when you’re not connected to the interwebs you still have something to rock to. The next step undoubtedly would to have the system store your favourites or specially selected tunes.

â€¢ Playlists: Once you upload your tracks to the Google Music cloud, you can play around with it just like it was in a music app. Google Music also has a smart playlist feature called Instant Mix which will automatically build a list for you based on one song – It’s like iTunes Genius basically. Google says that they have servers actually listening to the songs to make their playlist selection… the thought of servers with ears kinda freaks me out…

â€¢ Uploads: Until the labels decide to play nice you’ll be uploading your own catolgue so the quality will be the same as what you have to hand – Google Music will support up to 320kbps.

â€¢ Unauthorised Uploads: If you don’t own then or if you’re not playing nice with copyrights the Android team will remove any tracks when asked to do so.

â€¢ Seamlessness: Any change you make to your Google Music library on one device is automatically pushed to other devices.

Google Music is currently in beta but you can ask for access (if in the USA or can slip in via a proxy server) and get storage space for 20,000 tracks for free!