Google Maps has 3D London Landmarks Popping out of the Screen 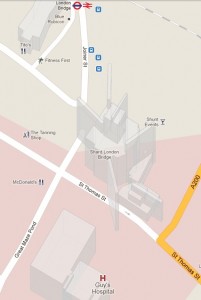 Everything seems to be going 3D and Google Maps is no different. Buildings are breaking free of the flat map surface all over London!

The updates to Google Maps 5.0 for Android and at maps.google.com include isometric renderings of almost all the most important buildings and landmarks in the centre of London. Swipe a finger across your Android phone’s map and see buildings reach skywards.

Maps can also rotate, tilt and zoom in and out of 3D maps on your phone or tablet.

Google haven’t yet isomtericised (if that’s not a word it should be!) the whole of London at the moment but the 3D love still covers an area radiating from around Covent Garden and Waterloo. Bits of the West End and Soho are covered and then out west to Green Park and Buckingham Palace – East to the Bank of England and Aldgate, and North to Euston. There’s parts of South Bank that have been mapped from Vauxhall to the Tower of London, then down as far south as the Oval.

You can enjoy seeing Buckingham Palace, the Tower of London, The Tate Modern, the MI6 headquarters, The Gherkin and the half-finished Shard – already the tallest building in Britain! Oddly, Google’s London office hasn’t been given the extra-dimensional treatment yet.

As well London there are 3D buildings in maps of Paris, Barcelona, Stockholm, Singapore, Lisbon, Boulder, and 11 cities in South Africa. These all join Birmingham and Cardiff which were the only UK cities to get the special 3D love til now.