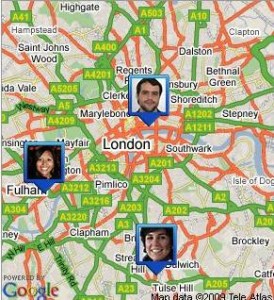 Well, Google has announced that it has added the ability to that trackingÂ via Google Maps for mobile from today.

Latitude, as it’s known, is a new feature of Google Maps for mobile that allows you to share your location with your friends and to see their approximate locations, if they choose to share them with you.

Well, it had to be like that didn’t itÂ really?Â So no spying on that cute girlÂ from the coffee-shop or the hunk at the gym!Â

You can use it on Desktop or most mobile phones and be able to:

“you use your Google account to sign in and easily invite friends to Latitude from your existing list of contacts or by entering their email addresses.”

Users will be able to get the new software application for their phone with Android, Blackberry, Symbian S60, and Windows Mobile already supported.

We iPhone users seems will have to wait a little longer by the looks of things! Grrrrrr!

The big G is wanting this to be everywhere and have released an iGoogle gadget and integrated Google Talk, the company’s IM service.

Users will be able to update status messages and profile photos on the go and see what everyone is up to.

I have to say that some people are worried that the technology if used by the wrong kind of people could allow terrorist groups to co-ordinate their actions more effectively.

But, let’s face it – they manage quite well without it.