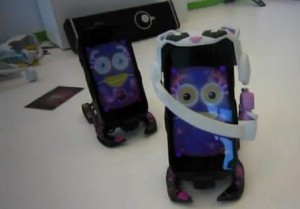 If you though that your Furby was adorable then you need to check out what has been birthed from a collaboration between Hasbro and Google.

These painfully cute bots are essentially a Nexus S Android smartphone slotted in to a battery operated exoskeleton dock thing. But still end up being heart meltingly adorable!

The exoskeleton, as well as containing the battery, also packs in a Bluetooth radio and a range of servomotors. The battery powers the dock and provides additional go-juice to the phone which works as the brain and controls the servos via Bluetooth.

These little critters are clever too! You see they’re not just dumb programmed faces on phones. These dinky robots react to their environment by using the senors on the Nexus S. The blower’s front-facing camera and touchscreen sends facial and object recognition information to Google’s cloud services via Wi-Fi and this comes back to help the Nexus bots deal with their surroundings. Using the accelerometer and gyroscopes the little blighters will get dizzy when you shake them, rub their display and they get happy / angry, show them a Transformers Decepticon card and they try to hide.

They will even take a photo of you, look it over and then decide if you are friend or foe with the relevant reaction.

Hasbro is equipping these with male and female “personalities,” as well as gender specific docks.