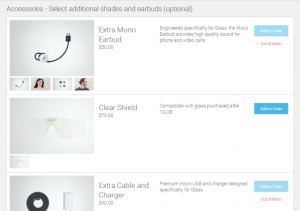 Google’s smart specs aren’t out for the general public yet as version 2 has only just been announced, but that hasn’t stopped an accessory store from popping up for Glass Explorers to investigate.

Google Glass 2 was announced earlier this week and those currently on the Glass Explorer team will be able to swap their old Glass for the latest.

Not only that, they can check out the list of accessories for the high tech facewear. Although, there is only three things currently listed in the store, and they’re not cheap.

The award for both priciest and pointless item goes to the US$75 Clear Shield which will convert Glass into something resembling lab goggles. Well, who wouldn’t want to rock that mad professor vibe when already wearing gadgety googles?

There are also some mono earbuds which plug into Glass’ microUSB port for higher quality audio than the built-in bone conducting speakers found on Glass v1.0, and they’ll set Glass Explorers back US$50 – the same cost as an extra cable and charger bundle.

There’s still no word on when the redesigned Glass units will be available for regular consumers. Rumour is that it will happen next year.