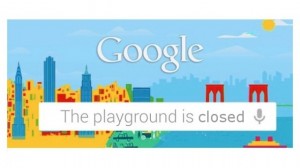 Tomorrow’s day of new Android lovliness in New York City has been cancelled due to Hurricane Sandy.

The event which has been on every Google Android lover’s calendar has had to be moved from its original date of Monday October 29th thanks to Hurricane Sandy making its way down the east coast of Canada and the USA.

The event was almost certainly going to include the official annoucements of the new Nexus 4 smartphone, a Nexus 10 tablet, and new models of the Nexus 7.

Not only will this mean reorganising the event but it also leaves Microsoft’s Windows Phone 8 event over in San Francisco to soak up all the limelight.

You can still preorder your Nexus 4 seeing as Carphone Warehouse seems to be ahead of everyone.

No word yet on when the Android event may be rescheduled but I will be present at the Windows Phone 8 get together in London.