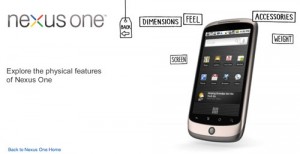 Remember the Google Nexus One launch with the promise that Google will also radically change the way we all bought phones? The Google Store was born.

Well, seems that not many of us were ready for that as Google has announced that will eventually stop selling handsets online and instead partner with carriers to sell the N1 in-store while using its website to promote “a variety of Android phones available globally.” Sadly back to the tried-and-tested method then?

The thing is that there’s other possible reasons. Could the lack of contract subsidies from anyone other than T-Mobile and reports of some serious customer service issues not gone anyway to boost this mould-breaking business plan?

I’m still a little shocked that such a big company has simply put its hands up and gave in. I don’t think that the business model was a bad one – perhaps they’d get brave again should they out a replacement to the Nexus One?