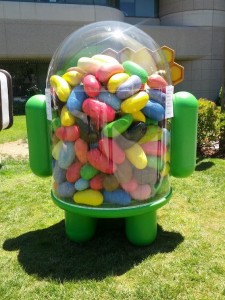 You’ve seen the statue but now Google has officially revealed Android 4.1 Jelly Bean – the next gen software for Android mobile phones and tablets.

Jelly Bean is the latest in the long line of confection-named Android operating systems and has some nice touches.

Google Now is probably the biggy – well, in my mind it is.

Google Now is the kind of assistant that actually appears to be useful; especially as it takes your location and the time in to consideration so as to give you more useful, and timely, information.

Imagine that you have an event in your calendar not only will it remind you, it nudges you when you have to leave and gives you the relevant public transport information and “will help you get there on time” — if you take the bus, it tells you how long it will take to walk to the bus and when the next bus will arrive. If you have a flight, Google Now keeps tabs on the flight status. Genius!

To fire up Google Now, tap on the search box or swipe up from the bottom of the screen. That pulls up cards filled with up-to-the-minute information on the stuff you’re doing. For example, it learns when you commute and tells you traffic information at those times.

Google Now will tell you how you favourite sports teams are doing and you don’t even need to tell your which teams you follow — it already knows because of your searches! Take that Siri!

Notifications now have loads of information packed in. Each alert expands and collapses as they bubble up to the top, or you can expand them with a two-finger gesture. Not *that* gesture! Sheeesh!

Gmail messages show subject lines, calendar alerts let you email everybody in the meeting if you’re running late, and photos appear and can be shared to Google+ without opening the app.

Search has been redesigned from the ground up, with improved voice search and answers to queries with the actual answer to your question, instead of a list of web links. Answers appear as cards that you can swipe away the to find a list of links waiting for you.

Jelly Bean has a higher frame rate so animations, menus and scrolling look super schmoooove, thanks to triple buffering. Jelly Bean can now even anticipate where your finger will be in order to make the screen respond faster.

The NFC Android Beam function can now send a photo or video by tapping two phones together, or pair a phone with a Bluetooth speaker by tapping them together.

Certain devices will be getting an over-the-air update in July, just in time for the Nexus 7 to be delivered 🙂