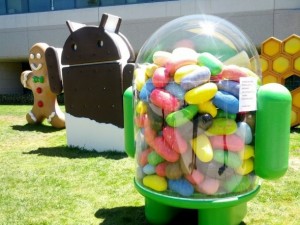 Google has its own way of announcing the new version of Android which involves planting a new mascot in its yard. The new Jelly Bean statue has now taken root on Google’s front lawn.

We’ve had Cupcake, Donut, Eclair, Froyo, Gingerbread, Honeycomb and Ice Cream Sandwich and now there’s the familiar outline of a green Android bot standing amongst its forebears. Through its clear body you can spy enough oversized jelly beans to give you an almighty sugar hit.

Even though Android Jelly Bean has bean.. err.. been strongly tipped for a while now the addition of the new sweet-packed statue confirms that Jelly Bean is indeed the next version of Android.

Moreover, the timing of the new arrival is also significant as tonight sees the the start of Google I/O developer conference where everyone is expecting the new Google-branded Nexus 7 tablet to be unveiled.

Could this also means that any devices, including the Nexus 7, will be powered by Jelly Bean? I should hope so!

The Amazon Kindle Fire fighting Nexus 7 tablet is rumoured to sport a 7-inch 1280×800 screen with a quad core processor pushing things along. The lack of a camera is a distinct move to keep the cost down.

Word is that it will cost around £200 or thereabouts.