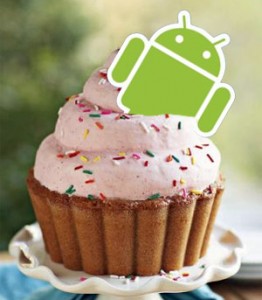 T-Mobile has started to push live Android 1.5, also known as Cupcake, to the plentiful G1 Android users over here in the UK and in the states.

The 44mb download is expected to be rolled out during the month of May.

Amongst the enhancements are the ability to have the onscreen keyboard in portrait mode, an increase in the number of home screen widgets, video recording capabilities – including the ability to shoot and upload footage straight to Youtube, better accelerometer support, stereo Bluetooth, speech recognition, a swifter GPS and better browsing speeds thanks mainly to the new Javascript and Webkit engines.

More than one million G1 have been sold worldwide with the HTC Magic literally just hours away from launch.

It’s basically a large hot-rodded smartphone – unfortunately price has gone up from $99 to around $250.