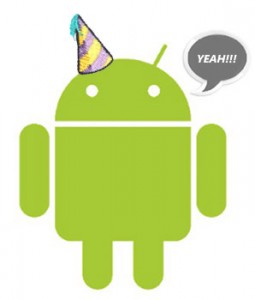 It took Android 20 months to go from 0 to one billion app download – but a mere 5 months more to clock up two billion with the three billionth being announced yesterday.

Granted, Apple isn’t exactly looking over its shoulder just yet with 10 billion app downloads being marked up on the iOS on the companyâ€™s quarterly earnings report.

Still, not bad figures at all. I’m sure that Google is more than happy to see these increases which also proves the popularity of the Android operating system.

Just to underline how well Android is doing, Googleâ€™s Senior VP of Commerce and Local, Jeff Huber, announced that more than 350,000 Android devices are being activated each and every day.

I’ve just come into possession of a Samsung Ace – so, what this space for another Android handset hands on review 😉