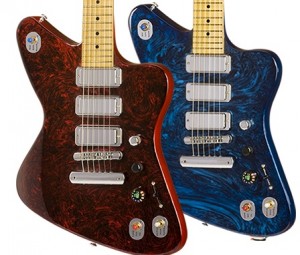 Everyone seems to be getting in on the app action but I thought guitars were free of this – effects app stores I can understand, guitars no.

Gibson apparently see things differently and, following on from their Robot and SG Robot guitars, have opened up their Firebird X system. Now I understood that Firebird X was one of a range of Firebirds – the one with the Robot additions. It’s seemingly also the platform which hosts their underused Pure-Analog Engine.

We are only using about 20% of the power of the Pure-Analogâ„¢ Engine. This leaves enormous possibilities for future enhancements without any hardware changes. The entire Firebird X system is designed to a new Gibson standard which will allow other companies to develop hardware and applications that can integrate with any guitar that uses this standard, including the Firebird X.

Gibson are looking to set up an app store using Apple as a model so that vendors can sell their applications with Gibson keeping a beady Apple-esque eye on those apps ensuring that they fit the requirements.

This should mean that there’ll be a range of such equipped axes to suit every twanger’s budget.

As this is being aimed at instrument geeks and not gadgety freaks they promise that all product enhancements, both paid and free, will be very easy to install via a simple firmware update option their Tone Editor software. The firmware is downloadable, and updates and upgrades take about a minute.