Get Some Darth Vader Auto-tune and Freak out X-Factor 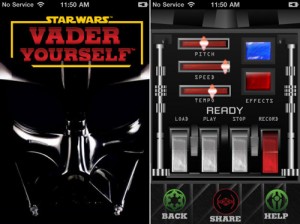 Apparently Dani Minogue knows nothing of auto-tune (yerright) and the clever pitch-control software was added after the X-Factor performances.

Well, THQ has now released ‘Vader Yourself’ on iTunes.

Basically your voice gets given the deep and wheezy treatment just like the Sith Lord – it’s gotta be cooler than talking into a biscuit tin!

It’s a simple auto-tune app that records and alters your voice, only with the added Star Wars branding and the promise to “bring out your Dark Side” – but who cares? This is the coolness!

You also get some heavy breathing noises to paste in as well.

Grab your slice of Sith fun on your Apple touchscreen device from iTunes now for 59p!